It was a mid-to-late 70s SF convention (maybe a Westercon?). Art Widner, who was clearly born with white hair, a white beard, and a bald spot, was just another of those older fans, kind of quiet, not much of an individual in my eyes (though I have to say I had noticed the twinkle in his eyes). Among Art's contemporaries, the most notable Bay Area fans of the time were Aubrey MacDermott, who would talk your ear off at a moment's notice about whatever he happened to think you should be interested in, and Clifton Amsbury, who would (and still will) do the same: but Clifton is likely to be interesting when he does it. A bunch of my friends were sitting around at a room party when Art came in.

"Anybody got a drink?" he said rather frantically. "I just had to spend a whole hour with Aubrey MacDermott!"

The whole room did a double-take. If Art could be bored by Aubrey, just like the rest of us, maybe we should pay more attention.

So I started paying (a little) more attention, and I generally liked what I found. In the mid-1980s, however, I took a bigger step. I asked Art to be a member of my fledgling apa-about-relationships, Intercourse. In the intervening twelve years, we've really gotten to know and care for each other, and it's been an unmitigated delight.

If I hadn't made friends with Art, I never would have read "The Junkie and the Recycled Octagon," the astonishing biographical essay he ran through the apa.

I never would have gotten to see the stunningly beautiful recycled octagon itself, Art's home on the Mendocino coastline--and to appreciate the contradiction of hand-built home and awesome scenery on the one hand, and fannish piles of books and papers on the other hand. I wouldn't know that his old home in Orinda, which looked like an ordinary house in a suburban tract, had commune and 1960's political history behind it.

Most important, I never would have known just how much is behind the twinkle in those eyes. 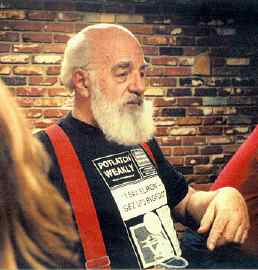