Art of the Antipodes

The year was 1983, the country was Australia, and I was a fan tourist, courtesy of the Down Under Fan Fund. I went to meet Australians and New Zealanders, but Americans dogged my steps all the way. One was lusty Lee Smoire, who helped me to meet koalas close up and personal; one was Cliff Wind, who joined me in stealing the NatCon for Seattle; and one was Art Widner, who showed me a familiar view from a new angle.

I remember Art in Sidney, at the Australian National Convention. He was his usual convivial self, chatting up pleasant-looking women and trying, as any good teacher should, to understand the culture of the country. In the bar on the first night, people like Jack Herman explained Ned Kelly, Sidney Nolan and Barry Humphries to us both. I could see that Art was making skillful, if mental, notes, ready for the pop quiz that was sure to follow.

I remember the last night of the con, too, as both Art and I attached ourselves to the Harlan Ellison/Shayne McCormick dinner party. Harlan was amused at us, an odd and hungry couple; we were amused at his antics at the Greek restaurant we eventually occupied, as Harlan tried to corner the market in Zamphir tapes.

Even better was the next stop of our trip through Oz. Of course, we weren't traveling together, Art or Cliff or me. (I was traveling with Lee and her beau-like friend, Carey Handfield, but like so much else in this memoir, that's another story.) We all wound up in Melbourne at the same time anyway, and the next weekend joined a four-car convoy to Hanging Rock. No one enjoyed their grilled chops and sausages more than Art, decked out in his "H.G.Wells" trucker's cap. What a picnic!

No one enjoyed the after-dinner entertainment more than Art, either. First, several Aussies attempted to teach us Yanks how to swing a proper cricket bat and hit a proper ball; I was remarkably bad, unable to keep from playing baseball and Cliff, who'd lived in Oz, was remarkably good. Art was quite presentable, offering the bat to the ball at the right angle, with the right form. Then we all headed off into the hills, to search for traces of the schoolgirls who had disappeared there so many years ago. Art reappeared (a trick he perfected in his return from gafiation), but Harlan never did. I think he's there still, which explains many things.

I said goodbye to the Americans, and took off in a small airplane to Alice Springs, my breathing space between Melbourne and Perth. No fans for a thousand miles, easy. In Alice I caught a tour bus to Ayers Rock, that monstrous chunk of red sandstone that's got to be a quarter-mile tall. Like a red iceberg in the desert, nine-tenths of it is underground. And only a few miles away are the Olgas: more sandstone, more red and more of them in a cluster of bulbs. If Ayers rock is the head of a giant, the Olgas are the toes.

As soon as I arrived at the Ulura, my motel, the tour guide hustled me and all the other tourists in our group (including the father and son Swiss mountain guides) back onto the bus. Off to the Olgas we went. We rode through miles of dusty sand and sparse vegetation until we drove into a deep gully between two Olga toes. As the other passengers walked out, I looked down from my seat. There, below my window, was a great expanse of shiny tanned scalp surrounded by a fringe of grey-white hair. Could it be?

Dear reader, you know it was. Art Widner in all his glory was now a part of my private trip to the mysterious monuments of the earth. Ancient and respected monoliths, meet a man who rivals you in slow considered comments, who preserves past ages in fandom as you do in geological time, and who's pretty good company to boot.

How Art danced in the bar at the Ulura! How he dazzled the gamblers and the tourists at the casino in Alice Springs on our last night! How he added a touch of familiarity and comfort in that alien setting! I will never forget Australia and I will never forget Art in Oz. 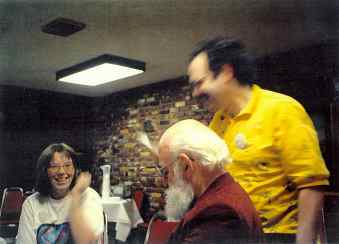