The Enchanted Duplicator speaks loud and long about Gafia, but never whispers of return, resurrection and redemption. Much of fandom's prose edda concerns the ways we fall away from Trufannishness, but it never speaks of those who Come Back,

That's because, when Walt Willis and Bob Shaw wrote it in the 1950's, de-gafiation was a rare phenomenon, like spontaneous human combustion. Some argued that when someone truly Got Away From It All, they would never come back. A fan might recover after a month, or even a year, but fans deemed true gafiates gone forever.

To a young fan in the 1960's, Art Widner was a legend. He'd gafiated in the late 1940's, but every corner of fandom still celebrated his exploits. FAPAns rhapsodized about the Brain Trust of the early 1940's, a pinnacle of wit and erudition in fandom's oldest amateur press association. Fanzine fans eagerly collected his fanzines, Fan Fare and YHOS. Even N3F members had a soft spot for Widner. He'd published "Unite or Fie!" the Damon Knight article that inspired the National Fantasy Fan Federation. In fact, all fandom esteemed him so highly they were willing to forgive him for that.

The salient point about Widner, beyond any praise for his fanac or intellectual gifts, was that he had Gafiated. He was Gone, one and all agreed, never again to Pub His Ish or instigate a grand fannish project.

When I gafiated in the mid-1970's, I knew it meant forever. When I resumed activity 15 years later, I thought I'd broken the chains of Mundane that had subdued even the mighty Widner!

I expected all fandom to fall to its knees in awe at my return. That's what I expected, until they told me that Art Widner had returned to fandom.

Then it was my turn to feel awe.

No less a fanhistorical authority than Harry Warner Jr., author of All Our Yesterdays and A Wealth of Fable, has acknowledged the enormity of Art Widner's return to fandom.

Until Art Widner, no fan ever gafiated for a lengthy period of time and subsequently resumed a comparably high level of fan activity. In short, Art Widner has done for fandom what even Houdini has not yet achieved in the non-fan world. Art crossed over to The Other Side &emdash and came back to the living world of fandom.

I couldn't have been more surprised if they'd said that Harlan Ellison had revived Dimensions. Yet skepticism returned when I recovered my senses,

Doubt teased me. Was this, in fact, the same Art Widner who'd been a leader of Boston's Strangers Club? Could it all be a sinister plot to usurp the luminous reputation of Art Widner for Ghu-knows-what purpose?

These questions led me to question First Fandomites in an effort to verify, or disprove, Widner's claim. Tucker and Speer were inclined to accept today's Kris Kringle-ish Widner is the same fan who'd crisscrossed the country to meet fans in the hobby's formative years. When Charles Burbee assured me that the current Widner is the same fan whom he felt owed him five bucks, I accepted the Miraculous Truth.

Art Widner has returned to fandom!

And whether you meet Art in the pages of his not-frequent-enough fanzine YHOS or at a convention like Orycon, you know why his return is more than a trailblazing moment in fanhistory. Despite a lamentable addiction to footnotes1, Art Widner remains true to his legend as one of the most intelligent, articulate and likable fans. 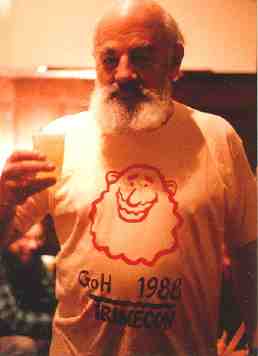