Art Widner is the first fan I ever met. It was at BayCon '86, the first con I went to. We had a nice chat and he gave me a copy of YHOS. Of course, I didn't have a clue, but I was lucky, and I remember feeling that this fandom thing was pretty good and I wanted to be a part of it, whatever it was.

I caught Art bare-handed at Corflu Ocho. We were short on gloves, and Art was a good enough pitcher that I could get by without a mitt. His strong bid for a complete game victory was cut short by a line drive that hit his knee, knocking him down to the sand of the tiny, sloping field. Later, back at the con suite, strengthened by several glasses of anesthetic, he related to us the grim tale of his childhood in Boston, growing up near the Braves ballpark, being a great fan of a great hopeless team. It was an experience that builds character. Art learned to value athleticism, teamwork, and the pure beauty of baseball over lesser and ultimately unreachable goals such as winning. Good training for being a science fiction fan, in my opinion.

The kick-off panel for Potlatch II was a discussion of Frankenstein, the book of honor. Art was on it with Eileen Gunn and Brad Lyau. I understood why Brad was there &emdash he's a historian with a specialization in science fiction. Eileen, of course, is a mad scientist. But I was worried for Art, at least for the first twenty seconds or so, until I could see he really knew his stuff and remembered that bit about his being a retired English teacher. From what I saw on the panel, he was a pretty darn good one, too &emdash his fannish enthusiasm for the literature came across as clearly as his discussion of the style and structure.

Mats Henricson, a fan from Stockholm, was the Swedish phone company's representative to the C++ standardization committee, which meant he had to fly to meetings all over the world in places like San Francisco. It was tough, but someone had to do it. He was staying at our house for a few days after a meeting, when he mentioned that he was interested in the California coast and had arranged an invitation to stay with someone who lived out that way. Did we know a fellow named Art Widner? We gave Art a call, packed Mats in his rental car and tried to caution him about the twisty road and the cliffs. Then we wondered what the hell was going to happen when our very nice but certifiably gonzo high energy houseguest was cooped up with the Sage of Gualala. Two days later Mats came back, happy and excited, telling us over and over what a great guy Art was. Then he told us how concerned he was about Art's wooden house in the trees and gave us some money to buy Art a fire extinguisher.

It all came together when Art had an ish of YHOS to collate, and Spike and I had the weekend free. We made the long drive to Anchor Bay (a short straight stretch in the coast highway just north of Gualala), and got a cheap motel cabin nearby. Art's place is an octagonal timber pyramid perched on a hillside, with a view out through the trees to the sea. It is a thoroughly fannish house. Book cases are used as structural members and form the interior partitions, while heat is provided by burning rolled up magazines and junk mail in the central fireplace. Yes, we remembered to bring Mats' fire extinguisher. We had a great time walking around the hillside and down to the beach, going into Gualala for dinner, and hanging out by the fire in the evening, listening to jazz on the radio. The collation was a breeze. We ended up with several extra copies of the sheet that had the start of Art's lettercol, "Hall of Mirrors", with a picture of Art taking a picture of himself infinitely reflected in one of those hotel bathroom corner mirrors. Hmmm. There was a cover sheet that had been over-printed on the interior. I put it together with seven copies of the extra sheet and made a special issue &emdash every time you turn the page, there's Art in the mirror again. 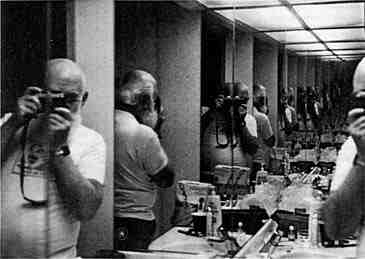